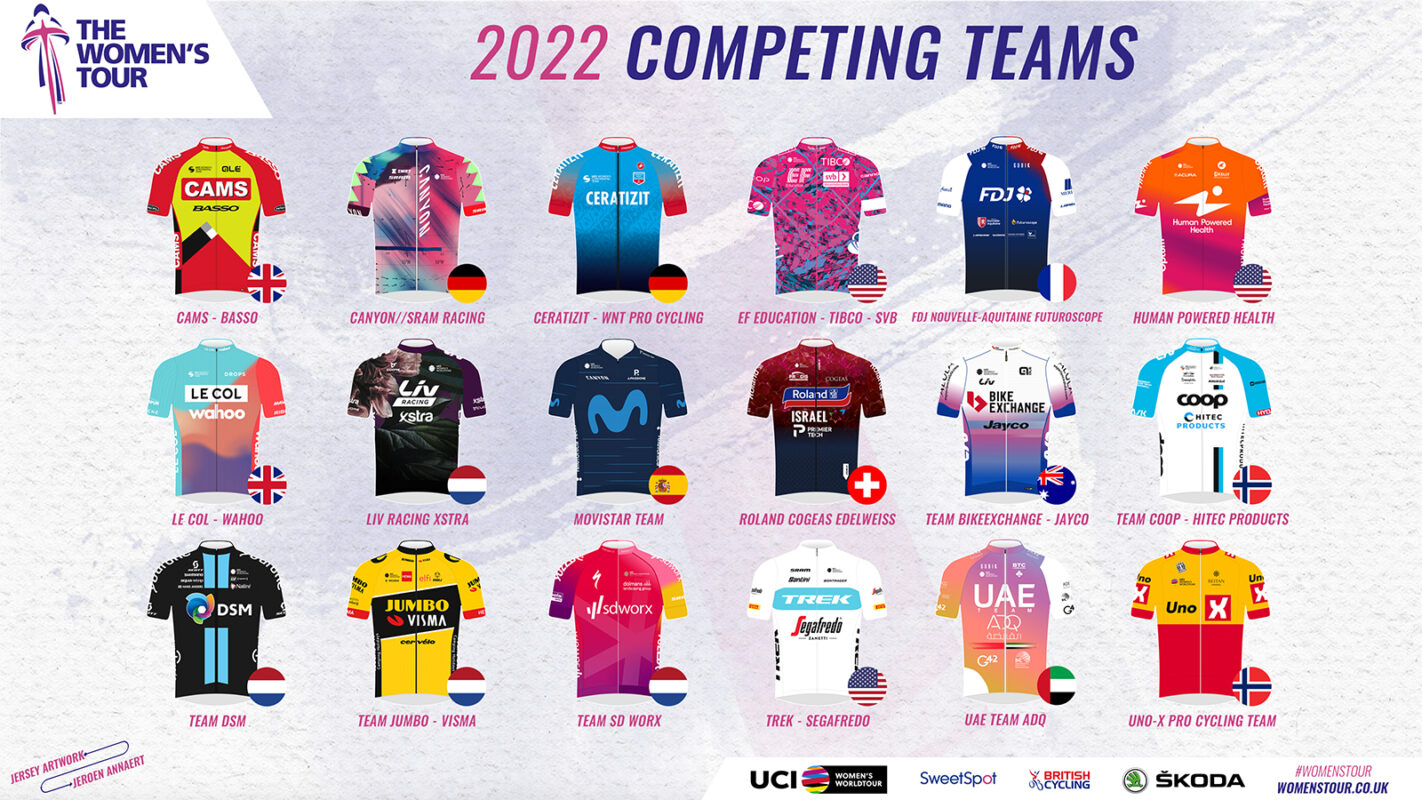 All 14 of the world’s best teams will be in action at this year’s Women’s Tour (Monday 6 – Saturday 11 June), the UK’s most prestigious women’s cycle race, as part of an 18-team field announced today.

This year’s race, the first edition of the Women’s Tour to take place in its traditional June calendar position since 2019 owing to the COVID-19 pandemic, will feature all of the top division UCI Women’s WorldTeams. In total, 108 riders will compete in the 2022 event, the biggest field in the eight-year history of the Women’s Tour.

Among those are Team SD Worx, the world’s number one team, and the squad of defending champion Demi Vollering. The Dutch team have also won more stages of the race – 11 – since the Women’s Tour’s inaugural edition in 2014.

British interest comes in the form of Le Col – Wahoo and the Essex-based CAMS – Basso squad. The former will be competing in the Women’s Tour for the sixth time, while the latter will notably compete on home soil when the race’s opening stage begins in Colchester.

Completing the line-up is the return of Norwegian squad Team Coop – Hitec Products, whose roster includes former British road race champion Jess Roberts, and Josie Nelson, who impressed during her debut in the 2021 Women’s Tour.

The full list of teams competing in the 2022 Women’s Tour is:

Entry into this year’s race means that Liv Racing Xstra, Team BikeExchange – Jayco and Team SD Worx remain Women’s Tour ever-presents since the inaugural edition of the event in 2014.

Mick Bennett, Women’s Tour race director, said: “We are once again thrilled by the line-up of the world’s best teams, alongside two British squads to excite the home crowd, will all be competing in this year’s Women’s Tour. We’re in for six exciting days of racing across England and Wales, and I know a lot of people are already counting down to Monday 6 June!”

Further details of the 2022 Women’s Tour – including stage routes and timetables; ŠKODA Queen of the Mountains and sprint locations; and competing riders – will be announced shortly.

While spectators can watch all the action by the roadside for free, race day hospitality packages offer guaranteed prime views of stage starts and finishes, complete with fine dining experiences. Visit sportsbreaks.com/Cycling for more information.

Highlights of this year’s race will once again be shown on ITV4 in the UK, and around the world via Eurosport and GCN. Women’s Tour organisers SweetSpot continue to work on securing the funding required to broadcast the event live. Visit sweetspotgroup.co.uk/partnerships for more information.