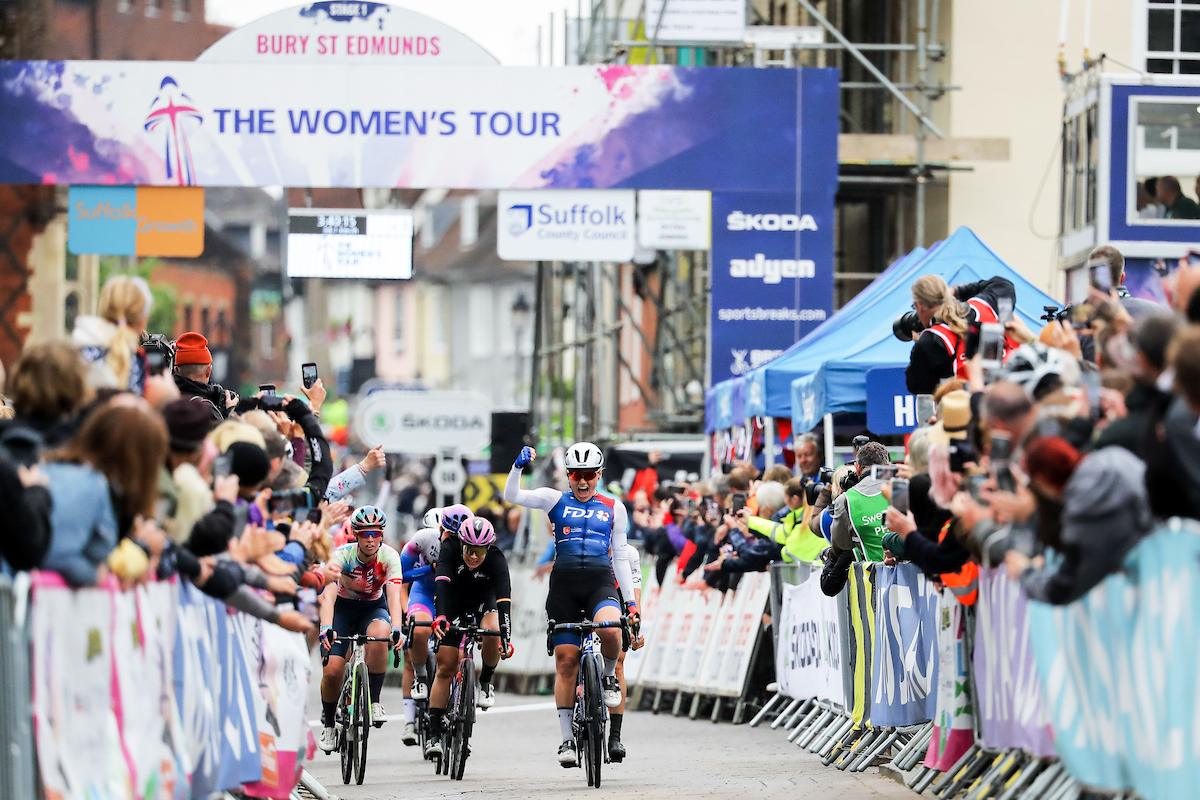 The Women’s Tour, Britain’s longest running women’s stage cycling race and part of the UCI Women’s WorldTour, not only wowed spectators on its first stage from Colchester to Bury St Edmunds this summer but also helped generate almost £1.1m of net economic benefit according to an independent survey out today (Friday 28 October) from race organisers, Sweetspot.

On Monday 6 June 2022, 97 riders from 17 international teams sped through Essex and Suffolk for Stage 1: Colchester to Bury St Edmunds.  Following the tour’s ‘Grand Depart’ from the Sports Park at Colchester Northern Gateway, the race passed through Colchester High Street, Layer-de-la-Haye, Abberton, Old Heath and Greenstead before heading towards Manningtree and into Suffolk through Bildeston, Stowmarket and Lavenham to the finish line on Angel Hill in Bury St Edmunds.

The event was hosted by Colchester Borough Council and Suffolk County Council in partnership with West Suffolk and Babergh and Mid Suffolk District Councils and supported by Colchester Amphora Trading, Suffolk Growth, Colchester BID, East of England Co-op and Vertas.

The ‘2022 Women’s Tour Economic Impact Report’, based on findings from a web-based survey of 527 Women’s Tour spectators, reveals that over 45,500 spectators lined the 88 mile route on the day, with more than 15,000 of these coming to see the event from outside of their local areas and over 80% pledging to visit the area again. The local hospitality industry also benefited with 8,000 attendees enjoying overnight stays and spending on average £138.80; whilst the average spend for day visitors was £52.96.

The one-hour TV Highlights programme shown on ITV4 and Eurosport generated a combined audience of 460,500, showcasing the region to a global audience, promoting the area as a destination of choice for tourism.

Cllr Andrew Reid, Cabinet Member for Public Health and Protection at Suffolk County Council, said: “It’s always a pleasure to host the Women’s Tour here in Suffolk. The race brings with it a feeling of pride and a real boost to residents, particularly to those who live along the route. It also showcases to a global audience, all that Suffolk has to offer for visitors to the county.

“Sporting events like these are a great way to encourage residents to be more active, with 61% of spectators saying they were inspired to cycle more often following this year’s race.”

Cllr Adam Fox, Deputy Leader of Colchester Borough Council said: “The Women’s Tour was a fantastic way to showcase Colchester on the world stage. Now we have the proof that it also delivered a major boost to the local economy. This year, we saw more residents and visitors than ever come along to cheer on the riders as they raced through our towns and villages. That means money spent in local businesses and delivering jobs and prosperity for our area. Hosting the ‘Grand Depart’ from our new Sports Park allowed us to showcase this wonderful facility and inspire even more people, of all ages and abilities, to keep healthy and active.”

Lynn Warner, the East of England Co-op’s Engagement Manager: “By sponsoring the prestigious Grand Depart for the Women’s Tour 2022, we anticipated that it would attract a huge number of spectators to Colchester which in turn would benefit the local economy.  As a result, not only have we been able to continue to develop our relationship with Colchester Borough Council, but the sponsorship provided us with the opportunity to highlight our community activities and increase our membership base.”

Ian Surtees, MBA FIoD, Chief Executive Officer, Vertas Group: “Vertas was proud to be a Stage 1 partner of the Women’s Tour 2022, not only because of the impact the event had on the local economy but also because it was the start of an incredibly prestigious sporting event. We are delighted that the Tour came once again to Suffolk and many local businesses were able to benefit from the publicity.”

Sam Good, Our Colchester Business Improvement District (BID) Manager: “The Women’s Tour is a special annual event that we are proud to host in Colchester. This year we saw even more interest as the riders made their way through the high street. The buzz that was created both locally and nationally had a really positive impact on Colchester as a whole. Events like this, which bring people and businesses together, help instil a feeling of pride in our soon to be city, creating a vibrant and exciting destination for residents, visitors and workers. The fact that the stage one section of the Women’s Tour had over 111,000 television viewers means that this tour has raised the profile of Colchester and surrounding areas, a great benefit to tourism in our area.”

Mark Cordell Chief Executive Officer Our Bury St Edmunds Business Improvement District: “I was yet again delighted that Bury St Edmunds played such a prominent role in the Women’s Tour event this year. The high profile nature of the event means that Bury attracts visitors from outside of the town, who attended the finish on day one but additionally the picturesque Angel Hill was also featured on national and international television. We have a tourism strategy in place to attract visitors to our town, who live outside of the County and the Women’s Tour contributed considerably to another successful year, visitor wise, for Bury”

Karen Chapman, Partnership Manager, Suffolk Growth: “At Suffolk Growth we think it’s important that high profile major sporting events and festivals such as the Women’s tour are staged locally. We were therefore pleased to support our partners with the stage 1 finish in Bury St Edmunds and delighted that the Women’s Tour once again has made such a positive impact in Suffolk, in its first post covid June running. It is an event that uniquely brings communities together along the route, stimulates the local economy with a direct financial impact, raises aspirations and ambitions through exposure to sporting champions, and showcases Suffolk as an exceptional visitor destination to a global audience”.