Ipswich Half Marathon set to return in 2023 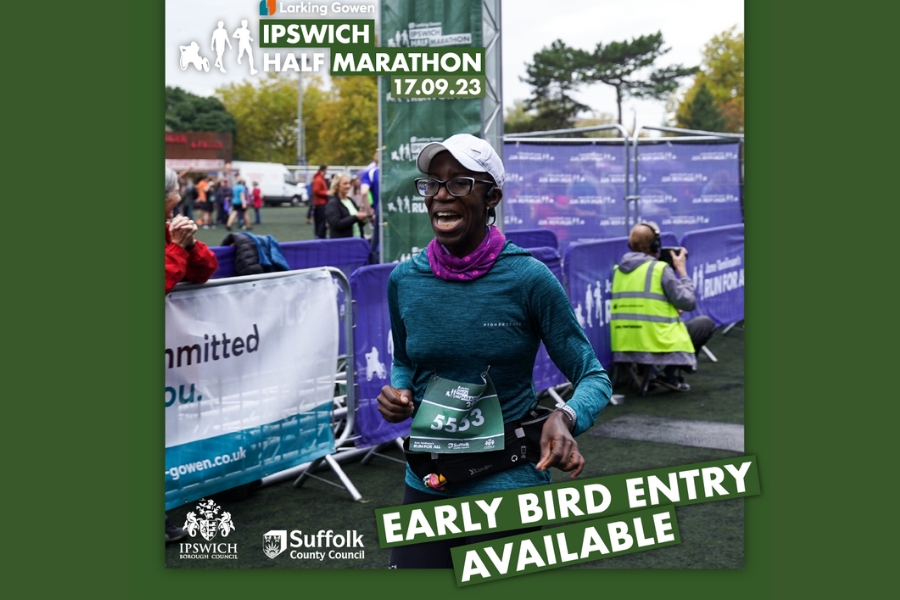 Ipswich Accounts and Business Advisors, Larking Gowen to retain title sponsorship of the Ipswich Half Marathon for the next two years

Larking Gowen, one of the country’s largest accounting and business advisory firms, has announced it’s latest partnership with one one of the UK’s biggest not-for-profit events companies, Run For All.

Larking Gowen have pledged their continued support and will once again sponsor the Ipswich Half Marathon. Larking Gowen Partner, Ian Fitch said: “The half marathon is a great event for the local community adding value to the business community through destination tourism and raising much needed funds for charities in the region. We are really pleased to be supporting it once again.”

Taking place on Sunday 17th September, the 2023 Larking Gowen Ipswich Half Marathon is expected to raise thousands of pounds for a number of local and national charities. The day is set to see runners of all ages and abilities return to the town’s streets in a carnival celebrating of running and fundraising for the sport loving county of Suffolk.

Not only is the half marathon making it’s return for 2023, but next year’s event will see the town’s 40th staging of the event. Marking 40 years since just over 500 participants crossed the line at the inaugural Ipswich Half Marathon, it’s hoped thousands more will sign up for the event’s 40th milestone year.

Welcoming participants of all abilities to take part; Run For All endeavours to ensure the event is truly for all. Whether entrants decide to run, jog or walk; the Larking Gowen Ipswich Half Marathon aims to facilitate a way for all participants to get involved.

In partnership with Suffolk County Council and Ipswich Borough Council, the event is being organised by Jane Tomlinson’s Run For All, the not-for-profit company behind a series of successful charity road runs including the Yorkshire Marathon and Leeds 10K.

The half marathon is set to get underway directly outside Portman Road Stadium. Runners will then head down Duke Street, through Ipswich Waterfront and along Cliff Lane. Continuing around River Orwell, runners will then head to Wherstead Road before returning to the grounds of Ipswich Town Football Club for the big finish.

Working closely with key strategic partners in the local community; Ipswich Town FC and Larking Gowen, Run For All will be aiming to keep the county’s aspirations going to be recognised as the most active county in England.
Despite the poor weather conditions, thousands of runners braved the rain to take part in this year’s event. Some came for a personal challenge, a few hoped to win and others simply aimed to get around the course, but all helped the 2022 Larking Gowen Ipswich Half Marathon a brilliant success.

Building on its previous organisation of the event, Run For All will continue to increase community and charity engagement, while also working to remove barriers to participation for the event, so that more people in the region can enjoy the benefits of getting active.

The event will also work closely with local businesses across the region and is encouraging anyone interested in partnering with the event to get in touch.

Providing fundraising opportunities for charities is the primary objective of every Run For All event, ensuring that the money being raised by the event stays local and supports the causes that need them most.
Runners are encouraged to fundraise for their own charity of choice or one of the event’s partner charities; the Jane Tomlinson Appeal, St Elizabeth Hospice, Lighthouse Women’s Aid, Fresh Start New Beginnings, Home Start and Future Stars charity.

Any further charities interested in becoming an Official Charity Partner of the event, whether they have previously been involved with the Larking Gowen Ipswich Half Marathon or not, are encouraged to contact Run For All as soon as possible.Mike Tomlinson, CEO at Run For All said: “We are delighted to be once again partnering with Larking Gowen for the Ipswich Half Marathon.

The event is so well received within the local community of Ipswich, so I have no doubt that will be another rewarding and enjoyable event for all those involved.
Providing fundraising opportunities for charities is the primary objective of every Run For All event, ensuring that the money being raised by the event stays local and supports the causes that need them most.

Whether you’re looking to achieve a PB, a way to raise money for charity or a new personal challenge, we hope to see you on the start line in 2023.”Cllr Andrew Reid, Suffolk County Council Cabinet Member for Public Health and Public Protection, said:

“After an absence of two years, it was fantastic to see so many participants of all ages and abilities on the start line this year to take on the challenge of the Larking Gowen Ipswich Half Marathon. Mass participation physical activity events have a unique ability to inspire people to get active and connect communities, which could be seen by the number of spectators who lined the streets to support and encourage all those taking part, despite the damp conditions on the day.
At Suffolk County Council, we recognise the importance of working with a variety of partners to provide physical activity opportunities for Suffolk residents, and the added value that events such the Ipswich Half marathon can have in raising much needed funds for local charities.

I look forward to seeing many more participants on the start line in 2023 and contributing to Suffolk’s ambition to become the Most Active County in England.”

Cllr Sophie Connelly, Ipswich Borough Council portfolio holder for Culture and Customers, said: “Events like the Ipswich Half Marathon are wonderful for our town, bringing people together to support charitable causes, each other whilst running and to cheer on family members and friends as supporters on the day.

“With 2023 a special milestone year for the event as we celebrate the 40th Ipswich Half Marathon taking place, we look forward to seeing more runners than ever before on the start line taking part plus our streets lined with supporters providing encouragement.”

Organised by Jane Tomlinson’s Run For All, the Larking Gowen Ipswich is part of the Run For All series of runs which, along with Hull, includes events in Sheffield, Bury, Leeds, York, Derby, King’s Lynn, Lincoln, Hull and Middlesbrough.

Entries are now open. To sign up and check the route out, participants are encouraged to go to www.runforall.com.